My PS3 has no earphone jack, which is sad. The Creative Inspire amplifier connected to via optical, also has no earphone out, which is strange. The LG 42″ LCD TV the console is connected to via HDMI, doesn’t have an earphone out jack, which is frustrating. The companies didn’t include a jack to save about $1 off each unit, now the consumer has to wreck his brain for solutions. Here’s some of them.


If you want to enjoy late night gaming without disturbing your family, Sony expects you to buy their overpriced Bluetooth stereo headset. This is a proprietary thing, other brand stereo headsets are limited to mono only.
You may use a bluetooth headset in mono. Personally, I don’t like Bluetooth for crappy audio quality. Bluetooth AD2P profile (for stereo music) utilizes a cheap in both resources and price SBC-codec to transfer audio, which is another $1 economy for not using commercial MP3 codec, at the sake of consumer. That means, if you are listening to an mp3 track via bluetooth stereo, the song is first decompressed from already lossy MP3 to the analog – that’s right, the connection is analog – input of SBC codec chip, which compresses it even more lossy and sends to the earphones via Bluetooth, which convert it to analog once again and play through their built-in amplifiers. Try to guess, is there any quality left after all these compressions and digital-to-analog and back conversions?
What is even more important to gaming is the the battery life. There’s nothing more annoying then having to charge anything instead of playing. So, ordinary wired phones is still the best solution for hardcore gaming.
To connect wired earphones to a Playstation 3, you have two options.
Option 1. Look at the back of your TV. Most sets have an AUX Audio Out line-out/monitor-out connection. 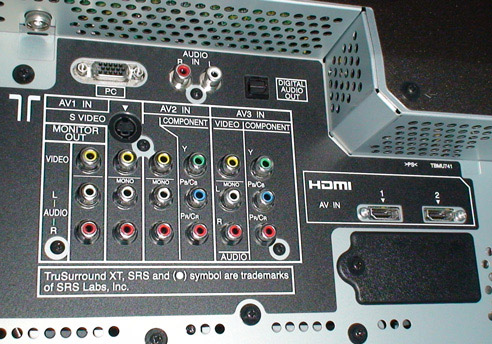 That is an analog 2-RCA connection, which is commuted to any input currently selected on the TV. This signal in unamplified, but increasing volume to the maximum on both TV and PS3 may get you enough power to drive your headphones. If not, you’ll need an amplifier. 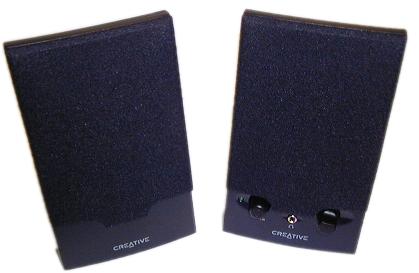 I had a Creative PC desktop speakers with a microphone output lying around, so I connected their input using a 1FemaleJack-2MaleRCA converter since the speakers had Jack input, not RCA. After that you have to edit the console’s Sound Settings to allow Audio Multi-Output .
Be careful to select your primary output correctly. In my case, my main output is the optical connection to the amplifier, which I use to get multichannel sound. All the rest, including the HDMI connection to the TV, is set to stereo. Well, the TV and the earphones are only stereo anyway.
Turn off the built-in speakers in the TV’s menu and you’re practically done. The main problem here is noise, coming from the cheap Creative amplifier and AC/DC adapter of the desktop speakers. What works for me, is increasing the TV volume up to 100% (the speakers are off anyway) and keeping the volume knob on the speakers to as low as possible. Connect your earphone and go playing.
Option 2. This option is similar to the previous one, but this time we will utilize the 3-RCA cable bundled with each PS3, and no one is using in this HDMI world.
This cable has an analog video and 2 audio outputs, which is perfect. Connect the desktop speaker (or any other amplifier) to this audio output via a 1FemaleJack-2FemaleRCA adapter, change the Audio Multi-Output to ON in the PS3 menu, plug in the headphones, adjust the volume and you’re done.
When I don’t need the earphones, I just do not power on the desktop speakers. When I don’t need the massive multichannel sound, I just don’t power on the amplifier. When I want the plain TV speakers, I just re-enable them in the TV settings. So the setup in easily switchable.
However, consumers could be saved a lot of trouble if at least one of the manufacturers – Sony, Creative or LG – wasn’t so cheap to begin with.